Many people love to utilize the trails in Cole’s Woods behind the Glens Falls Family YMCA, but did you know that they were the first lighted ski trails in North America? The trails were first envisioned by Tom Jacobs, a former U.S. Olympic Nordic Skier.

Tom was in contact with major Nordic Skiers, including Olympic medalists Odd Martinson and Magne Myrmo, the Nordic skiing Babe Ruth and Mickey Mantle equivalents in Norway. The timing was kismet. The trails were conceived just as cross-country skiing was taking off in the United States and coincided with the release of a cross-country skiing book written by Tom’s Olympic teammate, John Caldwell. 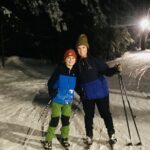 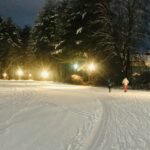 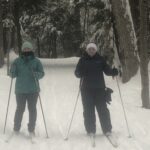 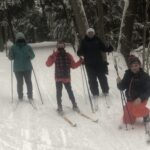 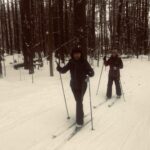 Steve Kvinlaug, a Norwegian native who relocated to Glens Falls in 1970, owns Inside Edge Ski Shop right beside the trails. He was able to serve as a translator for some of these incredible athletes. Steve is quoted in the Post-Star as saying, “These were my heroes coming to ski in my backyard.”

Glens Falls High Schools’ Nordic Ski Coach and longtime teacher, Bill Parks, was integral in getting the trails expanded from 2 kilometers to the impressive 35 acres it is today. Bill leveraged a civics lesson to gather kids to campaign for the trail’s expansion. Thanks to an onslaught of letters from the students, a city grant, and a donation from former Kamyr, Inc., they were successful in their efforts.

Bill told the Post-Star, “That was probably one of my better teaching episodes… It had an impact on those students, and obviously the community. And we got to go for walks in the woods.”

The trails at Cole’s Woods are now cared for under the leadership of Bill Blood, President of Friends of Cole’s Woods, a relatively new non-profit organization. Originally from Boston, Bill says the trails are a year-round draw to the area and provide outdoor recreation for people of varying ability levels. The COVID-19 pandemic has only made the trails more valuable to the community, as Bill told the Post-Star, “Everyone is trying to find a place to get outside and escape.”

When Warren County EDC asked Amy Collins, Director of Tourism and Development for the City of Glens Falls, about the trails, she said: “You might have been to Glens Falls before, but have you Nordic skied or snowshoed in Cole’s Woods? A slice of local heaven. A four-season recreation area started in 1971 to originally promote the first lighted Nordic skiing trails In North America. Pretty impressive!”

As part of the 50th anniversary of the ski trails, the Friends of Cole’s Woods have been offering learn-to-ski lessons on Wednesday evenings ending this week, and a Thursday night racing series that runs through February 11.