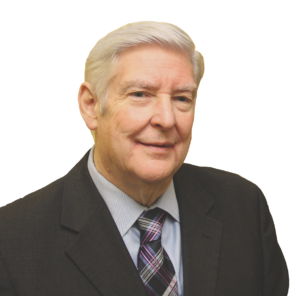 Edward M. Bartholomew Jr. became a leading architect of the modern City of Glens Falls when in 1977 he was elected mayor at just 28 years of age. He was the youngest mayor in New York State at the time and quickly set about healing political divisions in his hometown over the building of the Glens Falls Civic Center. He made it his mission to make the Civic Center a success. Ed recruited a big-name Civic Center director in Union College’s legendary hockey coach Ned Harkness and landed an American Hockey League team in the Adirondack Red Wings. These were just the first of many Ed Bartholomew projects over the next 40+ years to benefit the City of Glens Falls, Warren County and the entire North Country region.

As mayor, he built a modern ball park and brought minor league baseball to Glens Falls. He brought new industry to Pruyn’s Island and an intermunicipal sewage project to the Upper Hudson River. He helped establish the Greater Glens Falls Transit System. He helped set the course for the revitalization of Downtown Glens Falls. Ed reveled in solving the intricate political, financial and logistical challenges of complicated projects to benefit the communities he loved.

After several years in state government, Ed came home in 2013 to lead EDC Warren County where, with his signature enthusiasm and energy, he secured federal, state and local funding for major public works projects and large and small businesses throughout Warren County, including a $10 million Downtown Revitalization Initiative Grant for Glens Falls. At the time of his death, he was leading the effort to help local businesses and industries recover from the COVID-19 shutdown and had been working on these challenges virtually around the clock.

Ed was tireless in his pursuit of progress and entirely bipartisan in his approach to solving problems, and his lifetime in public service had forged close friendships with many federal, state and local officials who admired him and often relied on his wise counsel.

Matthew Fuller, chair of the board of directors of EDC, said: “Words cannot describe the grief we all feel today. Ed was not only a trusted leader but a trusted mentor to me and so many other people. Ed didn’t see obstacles, he saw opportunities, and our entire region will forever be grateful for the countless contributions he made. His efforts cannot be replaced. As heavy-hearted as we are today, we will carry the EDC torch in Ed’s honor.”

On behalf of the directors, staff, members and supporters of EDC, we express our sincerest sympathies to Ed’s family and many friends. We at EDC have lost a beloved colleague and Warren County has lost a devoted lifelong champion whose enduring contributions to our quality of life will benefit many generations to come.

Glens Falls Mayor Dan Hall
I know of no one who loved Glens Falls more than Ed Bartholomew. I admired his passion and how he dedicated much of his life to the city he loved.

Mike Kane, journalist and author, Minor in Name Only: The History of the Adirondack Red Wings
It all traces back to Ed Bartholomew hiring the right guy (first Glens Falls Civic Center Director Ned Harkness). It was a brilliant move. It changed the landscape of sports in the Capital District. (Ed) was always thought of as a very important figure in Capital District sports.

Matthew Fuller, Chairman, EDC of Warren County
Ed didn’t see obstacles, he saw opportunities, and our entire region will forever be grateful for the countless contributions he made.

U.S. Senator Charles Schumer
The Glens Falls region has lost an irreplaceable public servant, but moreover, I like so many of you, have lost a good friend. May God bless Ed and his family.

U.S. Senator Kirsten Gillibrand
Ed worked tirelessly to secure funding and support for the projects that have built present-day Warren County, including his leadership in the continued revitalization of downtown Glens Falls.

U.S. Congress Member Elise Stefanik
Ed Bartholomew was an extraordinary leader for the Warren County community and beyond. He was tireless in his efforts focused on economic development and opportunity for every family in the region. He was a joy to work with …. He was also incredibly kind and will be greatly missed.

Former New York Governor George Pataki
Ed Bartholomew was a dedicated public servant and his passing is a tremendous loss. Throughout his career, in the State Senate, as Mayor and as head of the Warren County Economic Development Corporation, Ed was a person who always cared deeply about making a positive impact.

Frank Thomas, Chairman, Warren County Board of Supervisors
Ed worked up until the day he became ill earlier this month and was asking for his work to be brought to him at the hospital in recent days as he recuperated. Ed was the go-to guy for economic development in Warren County, and much of what has been accomplished here over the last five decades can be attributed to his hard work and dedication.

New York Senator Betty Little
He put his heart and soul into every single project that he worked on.

The Reverend Rich Weihing, Pastor, Christ Church, United Methodist, Glens Falls
One of his greatest gifts was his passion for the church serving outside its walls.

Lynne Boecher, Warren County Democratic Chair
A consummate professional, genuine optimist and kind gentleman, Ed took unabashed pride in this region and established programs and resources to advance our standing throughout New York State.  On behalf of the Warren County Democratic Party, we salute Ed’s commitment and lifelong work for our community and extend heartfelt condolences to his beloved family and friends.

Eric Siy, Executive Director, and Jeff Killeen, Chairman, The Fund for Lake George
Ed worked quietly and tirelessly behind the scenes to protect the Lake and the thousands of regional businesses and jobs that depend on it. We will miss his keen insights, his big ideas, and his enthusiastic pursuit of everything good for Lake George and our local communities.  [Fund for Lake George profile of Ed Bartholomew]