This is the first in our “Catching Up” series of compelling stories about doing business in Warren County. 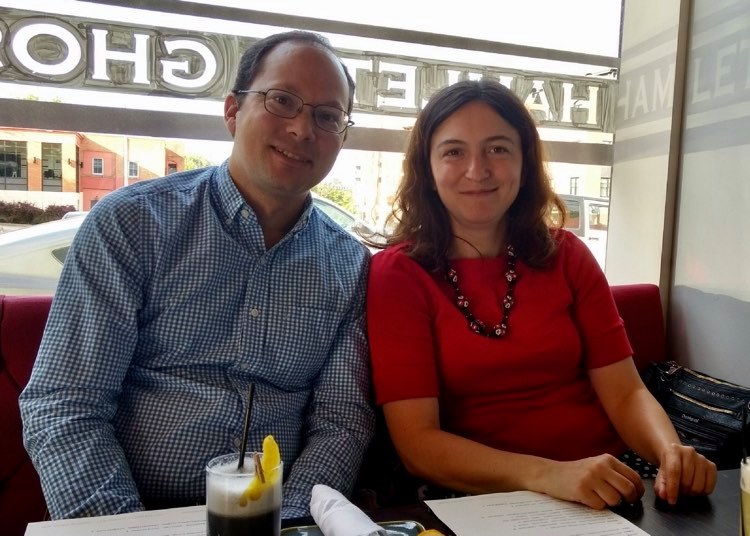 “She was trained as a visual artist and had a studio and gallery in the Shirt Factory for many years,” says Jason. “My background is in History, which I taught both at SUNY Plattsburgh’s main campus as well as their extension campus at what was then called Adirondack Community College. Since open tenure-track positions in European History are scarce, I decided to join the team at a brand new company in 2009: Adirondack Audio & Video.”

Jason says he had always loved music and had a keen interest in high-fidelity stereo systems, “So I figured this was a nice way to make some money while figuring out my path forward in academia.”

2010 was a big year for the Tavares family. Jason became an owner of Adirondack Audio & Video, which allowed him to delve even deeper into the fascinating world of high-end audio, and Jason and Adela became parents.

“Our daughter, Sophia, will always know Glens Falls as her hometown, and with the success of Adirondack Audio & Video, I saw no reason to leave this beautiful small city, At this point, ten years later, it’s truly home for all three of us,” says Jason.

Read on for his thoughtful answers to our questions.

Why relocate to Glens Falls?

In 2004 I was done with my coursework at Yale in New Haven, Connecticut, a place where rents were rising at an alarming rate. I was, quite frankly, struggling to pay rent with the small amount of money Yale provided for a stipend. When Adela’s mother offered to help us buy a house, my first thought was to instead use the money to buy a multi-family property, which would provide us income and allow us to remain close to Yale.

I researched everything within a few hours of New Haven, and Glens Falls JUST made it within that radius. I remembered visiting Lake George with my family when I was a kid, so I already knew how beautiful it was around here. The real estate prices at the time were attractive, especially compared to Connecticut. So we contacted a local real estate agent and pushed ahead with our plan. I now own several multi-family properties in the area and being a landlord is very much a part of my ties to this region.

We asked Jason: What do you think are the greatest strengths of our community?

Optimism. I’ve traveled extensively throughout the U.S., and small cities are generally in decline. As manufacturing moved offshore, small cities like Glens Falls have tended to fall on hard times, and the local population suffers economically, but also psychologically. Opportunity always seems to be somewhere else: In the bigger cities, or the expanding (and generally nondescript) suburbs. But Glens Falls has rebounded and there’s an amazing sense of optimism here.

Opportunities abound, as my own example shows. I came here with very little, and I now have several successful ventures, from rental real estate to Adirondack Audio & Video, and now to Antal Audio Group, a wholesale distribution company I helped to found in 2016, currently based in the old Glens Falls Business Machines building on Dix Avenue in Glens Falls.

What do you love most about living here?

What’s not to love? Seriously, it’s hard to think of something that Glens Falls doesn’t have going for it: A great location which is almost equidistant to three major metropolises (New York, Boston, Montreal), a position on the edge of the Adirondack Park with its tremendous natural beauty and opportunities for recreation in nature, a thriving and quaint downtown which is walking distance from my home, a wonderful school system that is providing my daughter a great education, and a safe and welcoming environment.

Why should people relocate to Glens Falls/Warren County?

Proximity to nature (without being too remote), proximity to important urban centers (without being a “suburb”), great local opportunities for business, a thriving and attractive downtown, a superb school system, and a lot of great people who call Glens Falls home!

Can you speak about doing business in NYC while living up here?

The one thing I haven’t mentioned is how Lake George and the Adirondacks are a vacation destination for those who live elsewhere, and especially for those with residences in NYC.  This connection has allowed for Adirondack Audio & Video to get a foothold in the New York City market, and beginning in 2015 we opened a location there. Initially in Manhattan, we moved in 2018 to Brooklyn in order to get more space. Now, within a month, we will be back in Manhattan, in an even larger location!

I spend about 20% of my time in the city, and the 3.5 hour drive is a small price to pay for the lucrative opportunities that the city offers. I think having a primary home in “Hometown USA” (Glens Falls) while still being able to spend significant time in one of the world’s greatest cities is yet another thing that makes Warren County an amazing place to live.

Tell us about your business!

Adirondack Audio & Video has itself grown from a small company offering “smart home” solutions for audio, video, HVAC, lighting and surveillance into a full custom integration specialist for Crestron home automation systems, plus a high-end stereo and home theater showroom and even a place to shop for new and used vinyl records!