/ “The Upside” Blog / Small but Mighty: Meet the 9 Hamlets of Warren County

Small but Mighty: Meet the 9 Hamlets of Warren County

When we think of a hamlet, most of us go right to Shakespeare! But in this context, a hamlet is a sparsely populated, unincorporated settlement within a town that is not considered a village. A hamlet does not have a separate government of its own and is regulated under the town and state laws.

The word hamlet derives from the Old French term ‘ham’ which translates to home. This word choice is perfect for these picturesque and tight-knit communities. Warren County hamlets are home to beautiful bodies of water, gorgeous landscapes, vibrant art centers and thriving small businesses. 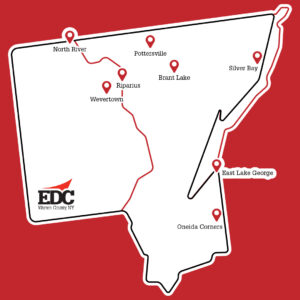 The charming hamlet of Brant Lake is located within the town of Horicon, nestled in the First Wilderness Heritage Corridor which stretches between North Creek and Warren County. The wealthy, including Theodore Roosevelt, have flocked here since the mid-1880s to fish and hunt.

Brant Lake itself is a 5 mile stretch of pristine water where you can boat, bike, fish, and swim to your heart’s content! In the winter, it is home to ice fishing, ice skating, and the ever-popular Brant Lake Winter Carnival.

A few hotspots in this hamlet are The Hub, a popular bike shop and restaurant, The Lazy Moose Garden Market, which offers deli food, coffee and souvenirs, and of course the public beach, which has no entry fee.

This beautiful hamlet on the banks of Lake George is split between Warren County (Queensbury) and Washington County (Fort Ann) and is located entirely within the Adirondack Park.

East Lake George is removed from the hustle and bustle of tourist season while still being close enough to enjoy the year-round benefits of living on the lake. This cozy hamlet was reported to have 801 permanent residents in the 2009 census.

Kattskill Bay was one of the areas that would have been incorporated into East Lake George Village, had the vote passed. This hamlet, located at the base of Buck Mountain, lies on the shores of Lake George’s Warner and Van Warmer bays.

The hike up Buck Mountain is moderate, six miles round-trip and rewards trekkers with unparalleled views of Lake George and the surrounding Adirondack Mountains.

This lakeside hamlet is just .2 miles from Lake George Island Boat Tours. This popular tour company gives scenic tours, historic tours, romantic cruises, and can bring you and your family to a private area of the lake to swim. You can also enjoy cliff jumping and tubing.

Nestled on the banks of the mighty Hudson River is the adventurous hamlet of North River. Located within the town of Johnsburg just 5 miles north of North Creek, this community thrives on year-round outdoor recreation.

A popular attraction for tourists and locals alike is ARO Adventures. Here you can get your adrenaline pumping with a range of fun activities that include ziplining, a ropes course, paintball, rock climbing, and more. ARO Adventures also offers whitewater rafting!

The Garnet Hill Outdoor Center located at Garnet Hill Lodge is a four-season adventure center offering hiking, mountain biking, cross-country skiing, snowshoeing, and more. The extensive trail system is open to guests and visitors free of charge for hiking and mountain biking from spring through fall.

The arts are alive in North River, too. A couple artists of note are J & J Brown Garnet Studio​ which is run by Joe and Judy Brown. They offer a full range of custom-designed jewelry made with locally-mined Garnet and set in 14K gold and silver.

Jan Palmer is a North River artist and teacher specializing in watercolors and pastels. Palmer worked as a children’s book illustrator for 35 years before retiring, at which point she refocused on fine arts and began entering juried art shows.

North River is also home to Barton Mines, the last garnet mine in New York State. Its neighbor, Hooper Mine, a former garnet mine is now a tourist attraction and museum.

This quiet, quaint intersection is home to the locally beloved Bean’s Country Store. Bean’s is a family-owned and operated deli and restaurant which serves the community year-round.

The hamlet of Riparius straddles the towns of Johnsburg and Chester in the Upper Hudson Valley. Riparius was originally called Riverside until the name was changed to avoid confusion with other settlements in the area. Riverside translates to Riparius in Latin.

Riparius is currently the terminus of the Upper Hudson River Railroad, a tourist train that departs from North Creek during the summer months. The Riverside Station was built in 1913 by the Delaware and Hudson Railroad and was added to the National Register of Historic Places in 1997.

Beautiful Silver Bay is nestled on the banks of Lake George in the town of Hague. Silver Bay is majestic to behold all year round and is most known for being home to the Silver Bay YMCA.

This sprawling campus was founded in 1900 and is the site of the first historic encampment of the Boy Scouts of America, founded in 1910. Notable structures include the historic Hepbron Hall, built in 1901, a sprawling Victorian Mansion built in 1895 called Paine Hall, a 700-person auditorium built in 1909, Helen Hughes Chapel, built in 1921, Fisher Gymnasium (1917), and the Boathouse. There is also a traditional-style Ice Cream Parlor open during the summer. The Silver Bay YMCA Conference & Family Retreat Center was listed on the National Register of Historic Places in 1980.

Silver Bay is also the home of the Hacker Boat Company, the oldest builder of motorboats in the world.

Wevertown is a peaceful hamlet located in the Adirondack Park within the town of Johnsburg at the junction of Route 8 and Route 28. Wevertown was founded by John Wever and his wife Mercy Barney Wever who operated a sawmill. Originally, Wevertown was a tannery that opened in 1833.

Today, Wevertown is home to the popular Beaver Brook Outfitters who offer a wide range of services, including guided whitewater rafting trips, canoe, and kayak rentals, and a winter sports rental shop. They specialize in all kinds of outdoor activities so you can enjoy all that Adirondack Park has to offer.

Pottersville is a small hamlet located on U.S. Route 9 in Adirondack Park that is home to around 500 people. Pottersville was founded in 1799 within the town of Chester and at the time was mostly agricultural. Carding mills and tanneries were eventually built which allowed the hamlet to expand.

Today, Pottersville is home to the largest marble cave entrance in the eastern United States which is still being carved out by the Trout Brook. The Natural Stone Bridge and Caves has been family-owned for more than 200 years and is open to the public.

There is lots to do at this family-friendly destination, from self-guided tours, adventure tours, disc golf, jewelry making, gem mining, and more! In the winter you can enjoy their snowshoe trails where you can see a sparkling ice bridge and frozen ice flows off of Trout River.

If you’re looking for a relaxing place to camp and explore, visit Pottersville’s gorgeous Scaroon Manor State Park. This campground and park on the shores of Schroon Lake has a fishing pier, picnic area, picnic pavilion, and swimming beach. All sites provide mobility impaired accessibility.

The hamlets of Warren County are beautiful, unique, and charming in their own ways. We encourage you to come through each of them next time you are in Warren County and explore all they have to offer. If you’re already a resident, maybe you didn’t know about some of the hidden gems in our area. We love to see even our smallest communities growing and looking toward the future.