The Charles R. Wood Theater is a 300-seat, state-of-the-art theater suited for theater, dance, music, film, and presentations, and is a cornerstone of the downtown Glens Falls arts scene, with a big role in tourism as well as the creative economy.

We caught up with Emily Murphy, Executive Director (and viral TikTok dog mom! Check out @emilyandmurray on TikTok.). 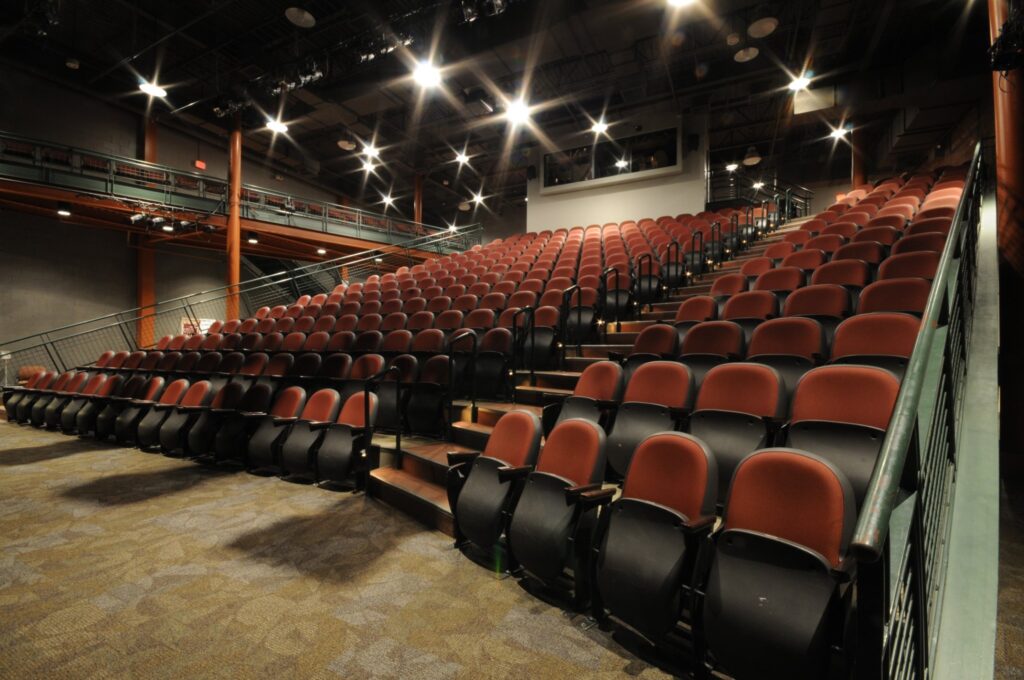 The Wood Theater is a multi-use performing arts venue with a main, 294-seat theater, a rehearsal room and cabaret-style theater and event space. It opened in June of 2004 after being renovated from a former vacant Woolworth’s Department Store to a fully functioning, professional theater.

“Over the course of a typical year, the Wood hosts more events than there are in a year – with everything from rehearsals, concerts, plays, musicals, parties, corporate meetings, even weddings,” says Emily. “We work with many other non-profit organizations both in the arts and in other sectors to provide an affordable space to host events. For instance, CWI hosts their Dancing with the Adirondack Stars fundraiser here each year, while other groups may rent the theater to show a film relevant to their cause.”

They also partner with arts nonprofits such as Adirondack Theatre Festival (who had a role in the creation of the Wood in the first place), Broadway Upstate, Glens Falls Community Theatre, Adirondack Ballet Theatre and others.

“They all come in and use the space to produce incredible work, everything from new plays to junior musicals, Nutcracker ballets, and everything in between.”

Located right in the heart of Downtown, the Wood collaborates with restaurants and businesses to leverage the foot traffic they bring in. “Whether that be in the form of drinks at intermission or a table in the lobby before a show, we love to support the businesses around us that support us in so many ways.”

What’s unique about Warren County and this region?

The amazing thing about Warren County is that we have a little something for everyone – and, as I like to joke, for every type of weather. If someone is visiting Lake George and wants to spend a week on the lake, enjoying the sunshine or walking among the shops but there’s rain on the radar, they can hop down the Northway for just a few minutes and join us for a show. In the winter, we’ve partnered with West Mountain when we show Warren Miller films, and people come to relax after a day on the slopes.

The sense of community in Glens Falls and the surrounding areas is really just incredible, too. Though we have this big, professional theater downtown surrounded by museums, shops, restaurants, we never lose that small-town feel. If I go out onto Glen Street even just to check the mail, it’s typical that I’ll run into someone I know from another business or organization. Many times, plans have been made standing right outside the theater doors when someone walks by and says “Hey! I’ve got this great idea for an event!” or “I heard so and so is looking for a venue!” 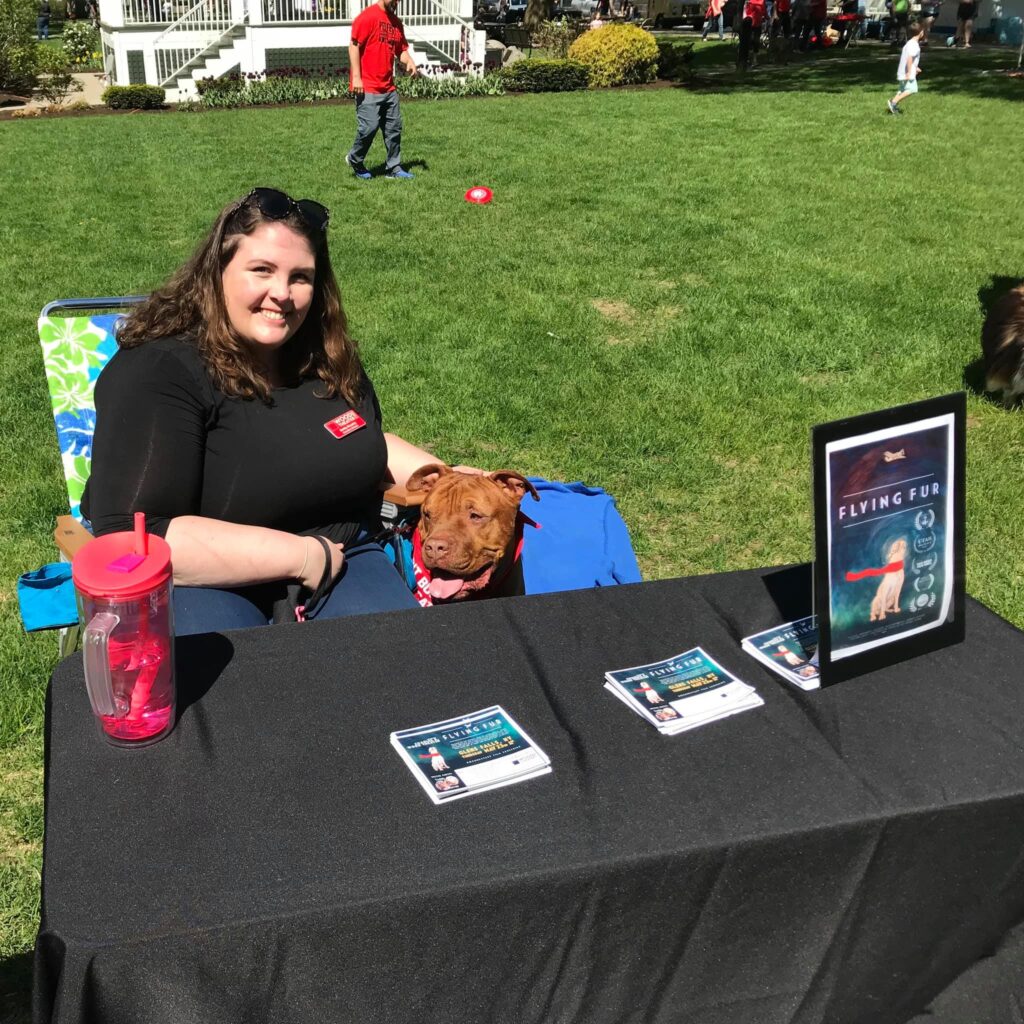 What does the Wood do for the local economy and quality of life?

When we stop and think about it, it’s actually kind of jarring how many people are affected by the Wood Theater. On average, we sell about 30,000 tickets a year to shows that have anywhere from 3 or 4 to 50 or 60 people in the cast and crew. While we love to talk about how many tickets we sell and how important it is to us, this past year has really shown how important the arts are for creating jobs and a creative experience for so many.

Each show that comes in needs a stage manager, a lighting designer, a sound engineer, often times a choreographer, a costume designer, a director, a hair and makeup artist, a set designer, carpenter, painter, prop master — which over 300+ events, adds up to a whole lot of jobs.

Of course, we also host shows that are run by many volunteers, and the performers are young students or just members of the community that want a creative outlet and fun, healthy way to spend their time. It is so wonderful to have a space here that allows folks of all ages and walks of life to come in and create, improving their quality of life and in turn providing some entertainment and escape for our community, too.

Can you talk about what the Save Our Stages act will mean to the Wood?

We know and appreciate how hard the past year has been for everyone, and we understand especially the financial hardships that the pandemic has brought upon many small businesses and non-profits that rely on having “butts in seats” as they call it in the industry. We were the first to close, and will be the last to reopen, which made staying alive incredibly difficult.

Thankfully, we have a very solid support base who showed up for us when we told them we needed them and we were able to keep the lights on and keep our staff at part-time for a majority of the closure. But, we also knew that our community had been significantly impacted financially, too.

When we found out the Save Our Stages Act had passed, it really invigorated us with a new sense of hope that we, quite honestly, had begun to lose. After a year closed, we were creating disaster budgets and pouring over hundreds of “what ifs” that were all quite bleak. But, the opportunity to receive federal funding that supports reopening is HUGE.

The funding can be used for payroll, operating expenses like cleaning supplies which will be needed on a significant level, insurance, utilities — all items that have drained us of the limited funding that was coming in.

We know that a LOT of other organizations are in very similar situations to us and we are just happy to know that the arts as a whole are receiving help and headed in the right direction.

What’s on the calendar coming up?

We feel that the safest, easiest, and most low-risk way to ease back into events is through movies. Movies don’t require anyone backstage or in the green room, and folks can be spaced out comfortably and enjoy getting out and catching a movie.

There are also a lot of eager folks ready to get back in, though, so we are planning a few events for as soon as May, like a recital with the Dance Center of Queensbury, a showcase with Broadway Upstate and the Adirondack Theatre Festival has just announced a condensed season!

We’re working on trying to get our calendar for fall and beyond filled up with folks who had canceled events over the past year, but we are finding some are hesitant to commit to hosting a show at 33%, when financially they are used to selling out or selling hundreds of tickets.

We can’t wait to start getting people back in here – safely – as soon as possible, and making sure both audience members and performers feel completely safe and supported.

Throw in anything else you want us to know about!

I’d really just like to say a huge “THANK YOU” to our community for the support they’ve shown us over the past year – and the past 16 since we’ve been open! The Wood Theater is really a community effort in all things, and the kindness and love we were shown while closed really solidified that. Everything from donations to kind notes of support really meant the world to us.