The confluence of the Hudson and Mohawk Rivers and the transportation hub formed by the intersection of two major interstate highways, yields excellent proximity to the major population and capital markets of the Northeast U.S. and Canada.

Interstates I-87 and I-90 connect the upstate region with the national highway network.

Fast rail service, a year-round deep-water port, and a recently re-developed international airport with direct air service to major markets provide convenient and efficient access to the markets of the Northeastern United States and Canada.

I-90 (the New York State Thruway), which runs east-west, intersects I-87 in Albany, providing access to Syracuse, Rochester, and Buffalo to the west, and Massachusetts, including Boston and other New England coastal cities, to the east.

Information about traffic volume throughout the state is available on the NYS Traffic Data Viewer interactive system maintained by the New York State Department of Transportation.

The New York State Dept. of Transportation also maintains a database of its current construction and repair projects, searchable by county and individual communities throughout the state.

In terms of rail service from the Port of Albany, Canadian Pacific and CSX have major classification yards in close proximity, assuring adequate car supply and timely service.

Norfolk Southern has an intermodal facility located approximately 30 miles south of Glens Falls on Route 67 in the City of Mechanicville, NY.

Canadian Pacific also has dockside rail access with no intermediate transshipment at the Ports of Montreal and New York.

A private rail carrier soon to be determined will provide passenger and freight rail service within Warren County, on existing tracks that extend between Saratoga Springs (Saratoga County) and North Creek (Warren County).

Cargo can also be moved via the New York State Canal system, connecting the Hudson River with the Great Lakes, Finger Lakes, and Lake Champlain. 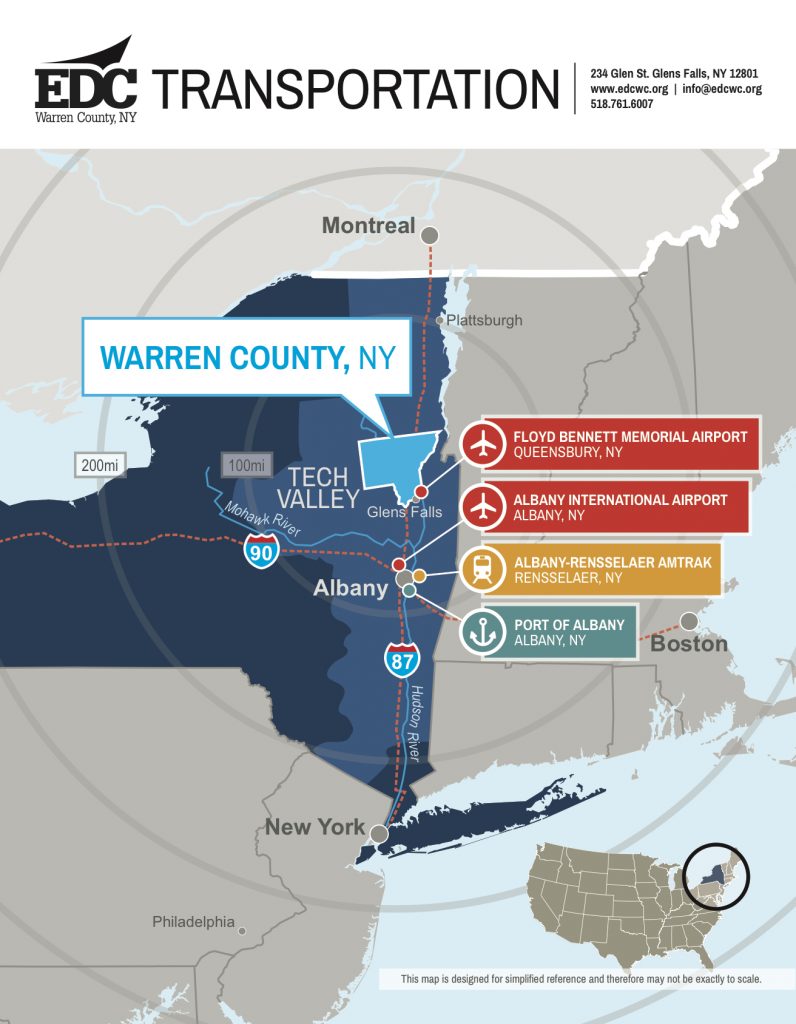