Historically, Warren County’s economy was directly related to its proximity to abundant North Country natural resources, which gave rise to logging, mining and timber/wood products including paper manufacturing. In addition, Warren County’s natural assets such as the Hudson River, Adirondack Mountains and world renowned lakes including Lake George serve as the driver for a robust tourism sector.

Since the latter part of the 20th century, medical device development and manufacturing, financial services, healthcare and information technology businesses have helped drive growth and provide diversification in the employment sector.

Today, the Glens Falls MSA is home to one of the largest “location quotients” or concentrations of medical/ surgical instrument workers, including well established operations by industry leaders BD Becton Dickinson, Medline Industries/NAMIC and AngioDynamics. The cluster here today originated a number of decades ago as smaller entrepreneurial start up companies primarily centered in the vascular/cathether industry that were subsequently acquired by larger national firms. That pattern has been repeated as the region has a rich history of entrepreneurial innovators that located in the region and created a series of start ups enterprises since the late 1940’s and early 1950’s.

Finance, insurance, information management, and business support services are also important contributors to growth. Locally based Arrow Financial, is the holding corporation for Glens Falls National Bank which is perennially hailed as one of the most sound financial institutions in the state and is also one of the oldest companies in Warren County dating back to 1851.

Warren County is also an important healthcare provider for the southern Adirondack region, through organizations such as Glens Falls Hospital and Hudson Headwaters. 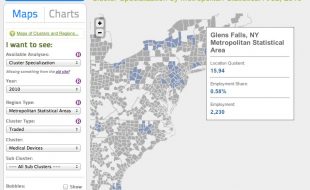 The U.S. Cluster Mapping Project is a national economic initiative based at Harvard Business School and supported by the U.S. Department of Commerce's Economic Development Administration that provides interactive, robust data and tools about clusters and regions across the United States.